Home How we work Our stories Be Cancer Aware

Fear of the unknown and unfamiliar ‘jargon’ can often make talking to health professionals difficult for people with learning disabilities. And that can cause problems when we’re faced with a potentially serious illness such as cancer.

Finding out the facts

That’s why Botton Village and Larchfield Community have joined forces with Macmillan Cancer Support. Together they’re providing ‘peer educator’ training sessions so that people in our communities can learn about how cancer is diagnosed and treated.

Stephen was one of the people who took part. ‘I didn’t know much about cancer but now I’ve been to the training I know a lot more,’ he says. ‘I used to think cancer was scary and worrying but they helped me get over that.’

The training sessions were specifically designed to meet the needs of adults with learning disabilities. ‘We heard real-life stories,’ Stephen explains. ‘And we did a role play about making an appointment. Doing the role play really helped.’

Now that Stephen has attended the training, he’s able to share what he’s learned with other community members. ‘If people want to talk to someone about cancer, they can come to me. I feel very confident and ready to talk to people about it now.’ 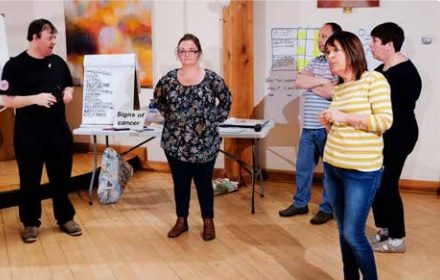