Trust supporter Sean Riley has taken on the ultimate challenge. He’s rowing 50km for 50 days right up to his 50th birthday!

Sean is clocking up the miles on his home rowing machine. He’s expecting each day’s distance will take between four and five hours. Community members have been making him posters and banners to decorate his surroundings – after all, the same four walls may get a little dull after 2,500km!

To give Sean the motivation to keep going with his epic challenge – he still has 19 days to go until he finished on the 19th April, our Build A Band group decided they wanted to record a very special musical treat.

So, we’re very proud to present Camphill Village Trust’s Build A Band group performing ‘500 Miles of the Rivers of Babylon’, you need to hear this!

Sean’s work, providing mental health support in the workplace, means that he’s developed a keen interest in supporting people with neurodiversity or learning disabilities – and he’s delighted to be raising funds and awareness through this challenge.

‘I wanted to celebrate my 50th birthday in a way which was slightly different from just blowing candles out on a cake,’ says Sean. ‘It’s a challenge that will test my endurance, but I’m inspired by people with learning disabilities, and the resilience they show day after day.’

If you’d like to support Sean, you can sponsor him on his Just Giving page at: www.justgiving.com/fundraising/sean-riley6 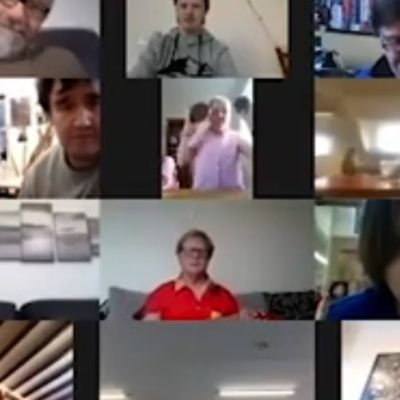