If you work for any length of time with Shane, you’re going to end up at Diggerland, probably on multiple occasions within a short space of time. He loves it there and the reasons for this love would, at first glance seem obvious: diggers. You’ve got your skid-steer loaders, backhoes, dumpers, dirt diggers, hydraulic booms, tracked excavators and so on and so forth. Chuck into the mix a load of dirt, mud and hardcore and you’ve got Bob the Builder’s dream day and Shane’s too.

Today was about my fifth or sixth visit with Shane and I was keen to explore why this place was held in such high-esteem by him.

True, but I was hoping for a little more depth so that we could find other attractions that would have a similar appeal.

“You get to drive diggers.”

It was evident that Shane did not want to waste his time there answering my ridiculous questions when there were tyres to be stacked and holes to be filled.

Calling Diggerland a theme park may be accurate however it doesn’t seem appropriate. Alton Towers is a theme park, so is Disneyland and each of those will have rides that would not fit into the entirety of Diggerland, but the theme is obvious and it’s a park. Despite its relatively small size, it crams a lot of hands-on action into it and it enables Shane and all the other visitors, to experience something they would not be able to ordinarily. Namely, control a 30-tonne piece of machinery worth in excess of £30000, repeatedly.

That’s right, a young man who requires support in so many aspects of his life due to his medical conditions, is controlling a 30-tonne digger in a park full of kids. Shane is in control.

Sometime later, back at his flat, I quiz him further about why he enjoys the diggers so much. He says that he’s in “control, in a good way.” He clearly recognises the boundaries and safety measures that are put in place to enable him to enjoy the experience and keep himself and others safe.

But there’s more to it than that. Shane is a regular visitor to the place, ‘regular’ being a significant understatement, so much so that staff know him. They go out of their way to say “Hi,” and are on first name terms with him. The manager always comes over for a chat with Shane, not with his support staff. When he’s driving the 4×4 accompanied by Bob or one of the other Diggerland staff members, Shane is spoken to with affection, care and fun. As he goes on to say, this interaction “makes me feel wanted,”

Shane stands out in both his physicality and his mannerisms, struggling to make sense of the things that we find natural and mundane.  At Diggerland, things are different. He knows the place and the place knows him. It’s a safe place where he can exercise control and be wholly accepted. 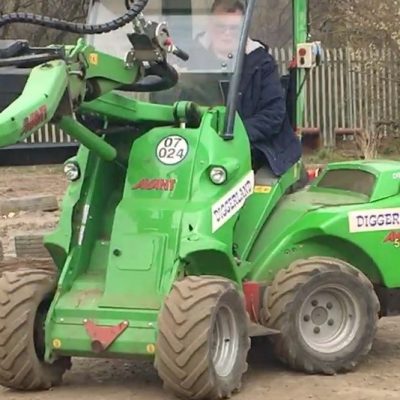